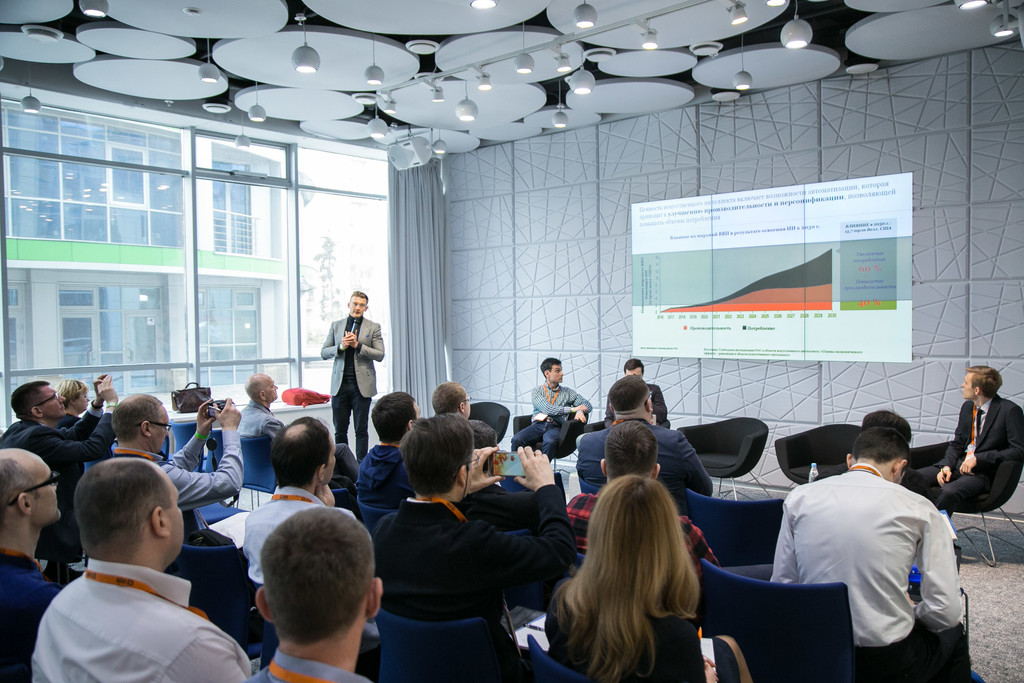 From chatbots to AI- algorithms in the diagnostics of diseases: main topics of AI Conference 2018

Artificial intelligence is the new driver of economic growth. The largest financial corporations, banks, and healthcare systems are increasingly introducing neural networks into their business processes, concurred speakers of the annual AI Conference 2018, dedicated to the integration of artificial intelligence into business processes. The event was held in Moscow on April 19.

Speakers made 15 presentations on the possibilities of AI algorithms in medicine, finance, retail, automotive industry and service robotics, as well as shared insider information and practical cases.

AI in the world economy

According to Oleg Danilchenko, artificial intelligence will help to increase world GDP by 14%: up to $15.7 trillion in 2030. All regions and industries will feel the influence of AI, but the greatest economic effect will be in China and the USA.

He also gave data on economic benefits by industry: 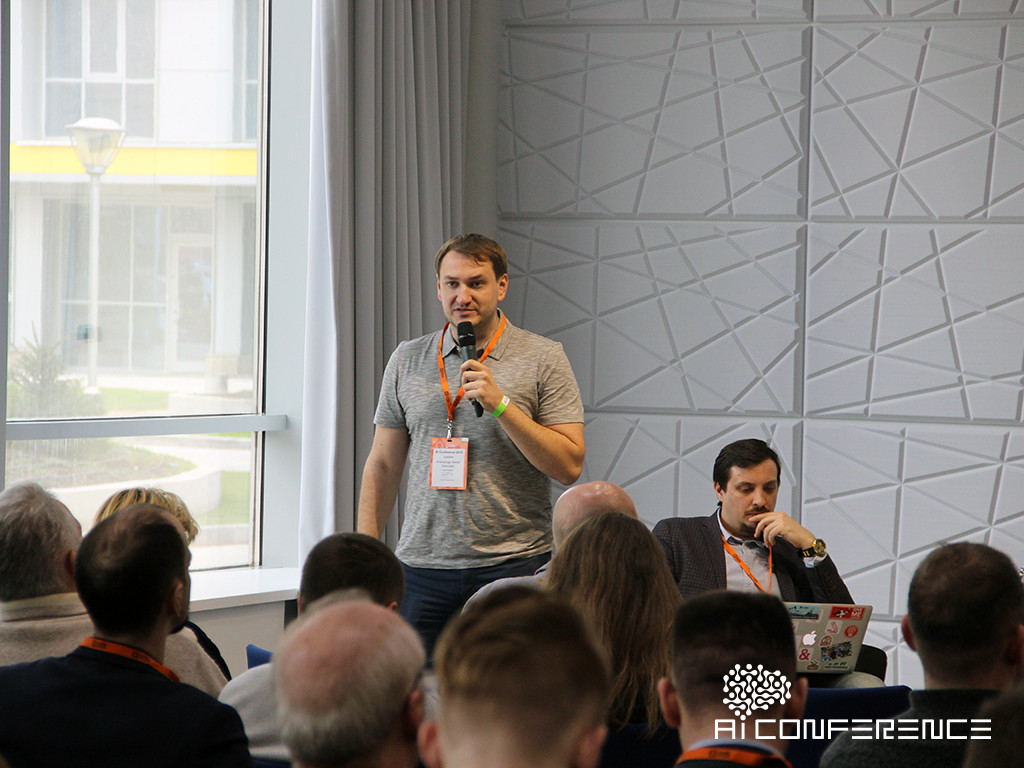 From the deep neural network to deep learning

According to Mikhail Belyaev, there has been an “explosion” in methods of deep learning based on learning by example over the last 5 years. One of the most discussed their use in healthcare is roentgenology.

For example, learning algorithms will “read” pictures made by X-ray machines, CT, MRI and diagnose pathologies in the future. They will be able to listen to how the heart works, or predict relapses.

“Analysis of medical images is a difficult task, especially because of the extremely limited volume of training samples. Deep learning can be effectively used to solve such problems with careful preparation of the sample of data and appropriate adaptation of the architecture and training procedures to the features of medical images,” concluded Mikhail Belyaev.

Dmitry Korobchenko named the improved algorithms and architectures, available data volumes, accelerated learning and output using the GPU among the reasons for the success of deep learning.

Almost 2 billion people worldwide use instant messengers, which is about 80% of smartphone users. Over 2.5 billion people use social networks, said the founder and managing director of Just AI Kirill Petrov.

Companies are increasingly using these channels for sales and promotion, which has led to a new concept of customer support, the development of the chatbots ecosystem. According to mister Petrov, the AI virtual assistant market will reach 17.7 billion dollars by 2023. The main impulse will be automation of customer support.

Head of user acquisition of Vezet Group Ilya Ukrainets has singled out such advantages of chatbots:

The architect at IBM Client Center in Moscow Stanislav Kladov noted the following steps in creating an effective chatbot: description of the problem, identification of client requests’ classes based on existing dialogues, understanding the language of clients for each of the classes of requests, bot learning, testing.

Marketingbot CEO Rostislav Plankin has developed a chatbot for the conference, which you can use now to receive latest news on the event, chat with participants, speakers, exhibitors – @aiconference_bot.

Participants focused also on the discussion panel dedicated to the application of AI-technologies in the banking sector.

Investment banker, founder SKOLKOVO Private Banking & Wealth Management Club Roman Davydov pointed out that as a result of competition with new digital companies banks could lose 20 – 60% of profits by 2025. 52% of financial institutions have already invested in solutions based on artificial intelligence.

Among the tasks of AI technologies in banks are:

The panel members stressed that the introduction of artificial intelligence into the banking sector should be thought-out and coordinated. Some financial organizations forget about efficiency, guided by the principle “the main thing is to do it in time”. And risks of the new technology are hushed up or not discussed. 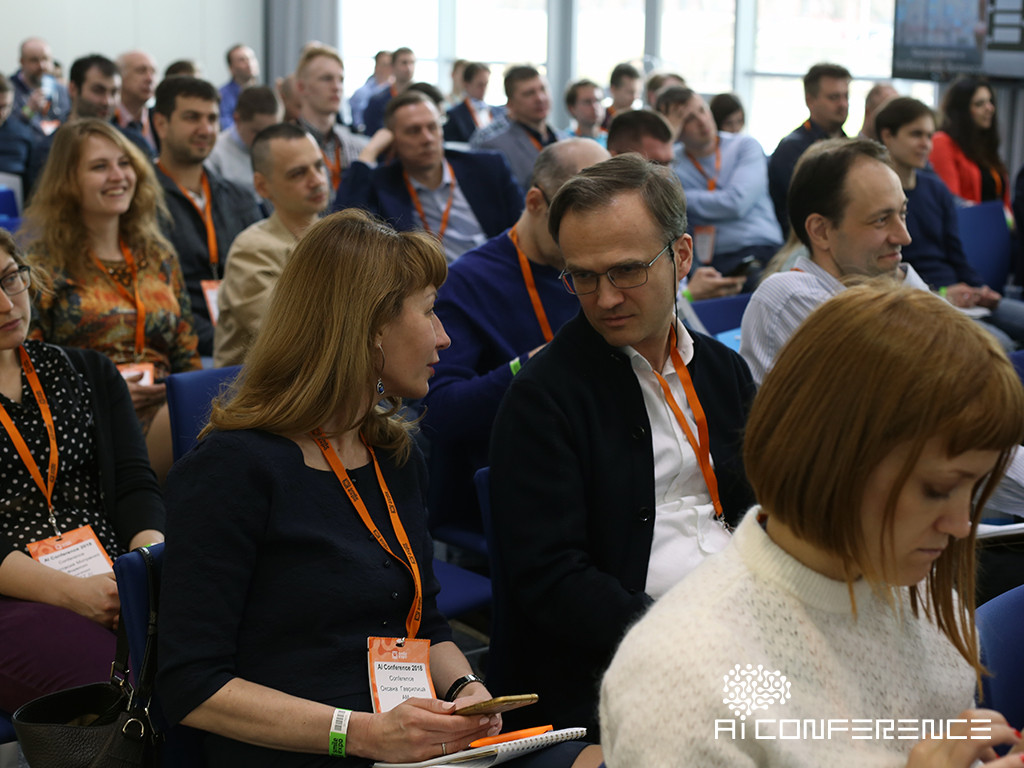 Startup battle and an exhibition area

In addition to presentations there was a startup battle at the AI Conference 2018. 14 projects competed, investors Igor Lutts, Lyubov Golubtsova, Viktor Kokh, Kirill Lukyanov were judges of the competition.

The ChatFirst project was the winner of the battle. The company introduced a virtual assistant with artificial intelligence to automate HR support in companies. ChatFirst was awarded a package for promotion from the crowdfunding platform Boomstarter and a certificate for free participation in the exhibition area of AI Conference 2019.

The service of instant redesign Ukit AI was the second, followed by a social and educational project PR Education. 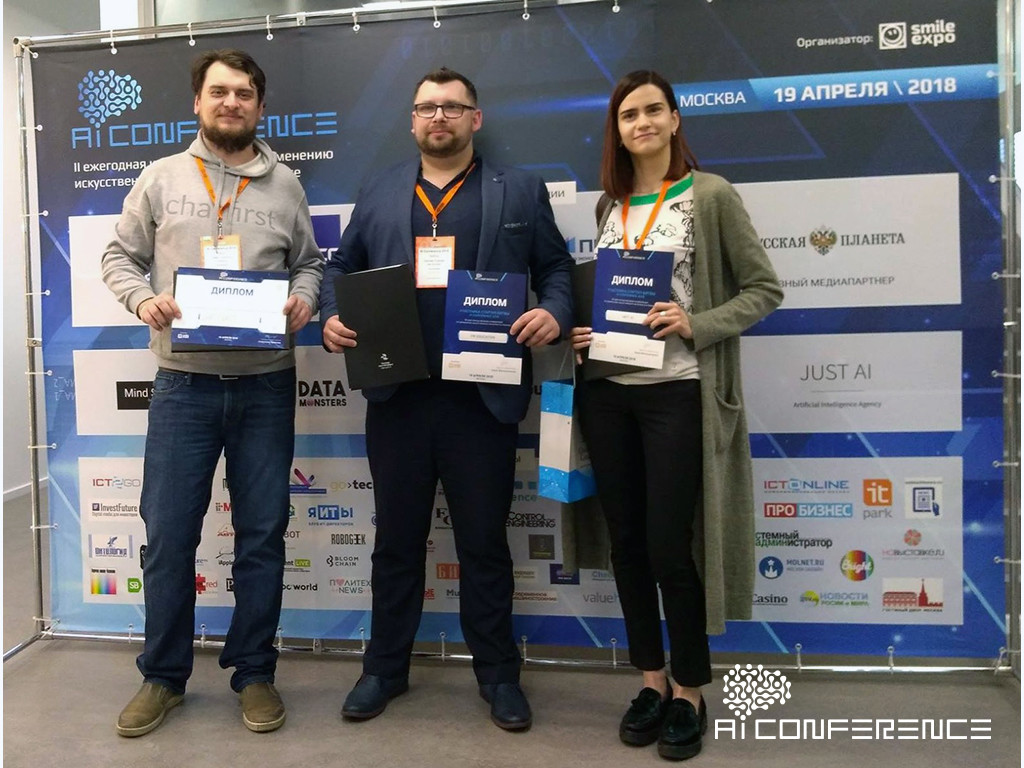 Guests of the event also had the opportunity to visit the exhibition area, finding there booths presented by Just AI, Mind Simulation, Data Monsters, IBM, PwC, PR Story, Inspector Cloud and others.

A company specializing in AI and machine learning technologies Just AI, as well as a blockchain-based AI platform GraphGrail are among sponsors of the event.

The organizer of the event, Smile-Expo company, thanks for the help of general media partners:

as well as all participants and guests.

Smile-Expo is looking forward to see you at the third AI Conference in 2019, dedicated to the integration of artificial intelligence into business processes. 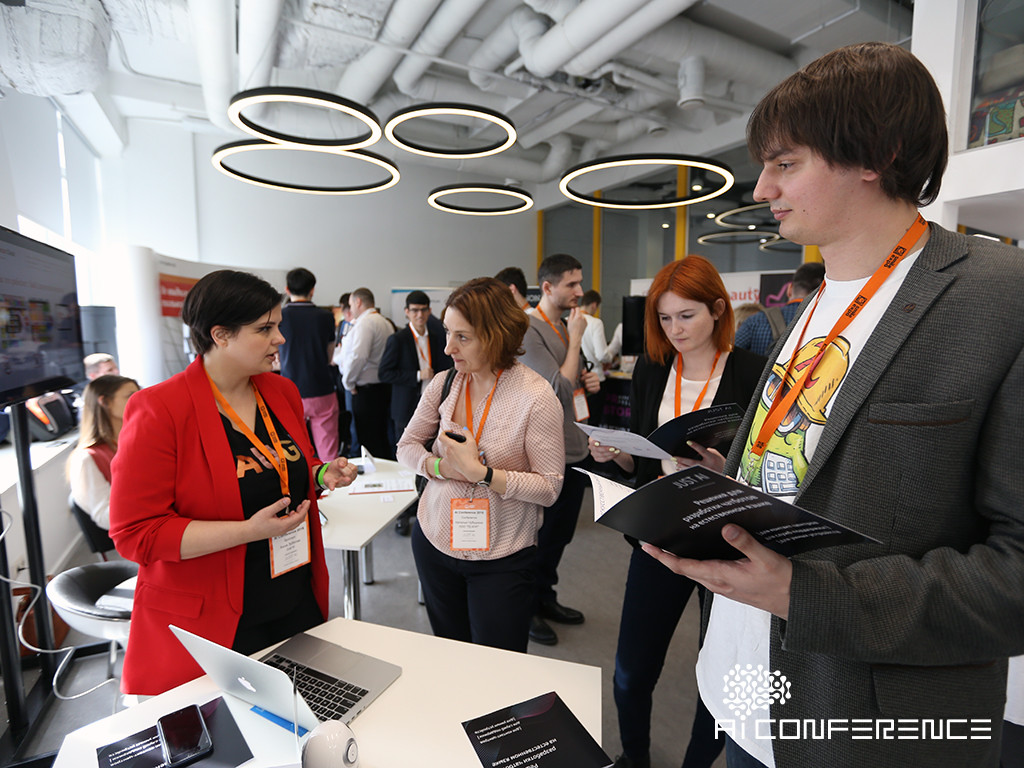 Be the first to know about new speakers